This new program could be of special interest to small town government elected officials as they look to establish programs to enhance the opportunities of their young people. Are there in your community, some young people being left behind?  Once a child finds a passion for something in life, they can change their behavior, their attitude, their belief, their friends, their grades and their lifestyle.

"Dan Young, Sr. was 24 when he picked up his first tennis racquet, Although the coach of Arthur Ashe, Robert Johnson, Sr., told Young that he was “too old to start playing tennis.” Dan felt differently.

Now at 77, Young is ranked  #1 by the N.C. USTA South. He is also an author, a columnist for the Triangle Sports Magazine in Raleigh, NC, and National Finalist in the Senior Games held in Cleveland, Ohio in 2013.

Young wishes to expose others to the “Sport of a Lifetime”, Tennis. He says, "You never see a runner smiling. Baseball requires a lot of time as well as Golf. Age soon becomes a factor in Football, Baseball, Basketball.  But Tennis, ah! you can play it for years."

As youth grow, and become your towns, state, and nation’s leaders, nothing can prepare them for life’s roads, and forks in the roads, and sometimes those often less traveled roads, Tennis will afford them the social, physical and mental capacity to carry on.

As an individual sport, tennis will teach them: self-reliance, determination, sacrifice, and the ability to take a loss, a defeat, a missed opportunity in stride."

Young proposes to the boards and commissions of small towns and municipalites, a day-long, 6hr. “Tennis for Life Program” for the Youth, and Parents of their town.

Why parents? Well it helps build lines of communications that parents can use to gain the trust, respect, and cooperation that every parent desires from their child. 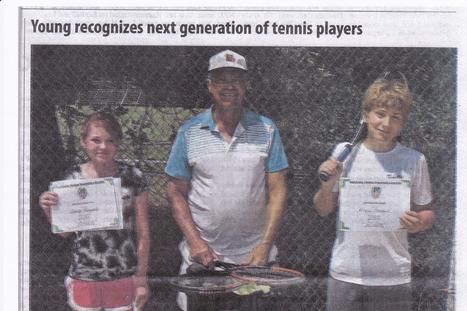